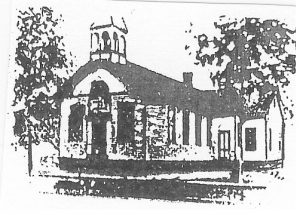 There was once a time when Uniondale, a small farming community, had no public library although many had often talked and hoped for one. On January 7, 1954, a group representing various community organizations met and elected the Uniondale Library Association. The chairman of the Association was Dr. Philip Cosgrove, for whom our library is now named. At that time Philip Cosgrove was also the President of the Uniondale Kiwanis Club. It was the insight, imagination and love for education of Philip Cosgrove and the dedicated efforts of fellow Kiwanis members that created the Uniondale Public Library.

The chosen building to house the new library was the old St.Martha’s Roman Catholic Church; a structure, built around 1830, that had also served as the first schoolhouse in Uniondale fifty years earlier. Since manpower and funds were desperately needed, all of Uniondale was called on to help. The Ways and Means Chair, Muriel Fishbein headed a full scale membership drive in which volunteers canvassed Uniondale raising over $1000.00 Hofstra College donated desks, tables and many books, Persans Hardware supplied the brooms and paint and Philip Cosgrove, known as a “jack of all trades and a one man army” gave most of his spare time with the Kiwanis Club painting and installing shelves and window panes.

Others who gave of their time were, Mr. Bove who laid the kentile floor, free of charge, Mr. Everett Arndt who waxed the floors free of charge for six months as well as Mr. Anthony Altomare, Marvin Clark, Al Fishbein, Bert Gerard, Meyer Ashendorf, Walter Lundwall, and Frank Hawthorne. Unfortunately, not all of the volunteers can be named at this time, for the list would be too long.

The library’s exterior was painted by five busy women, Muriel Fishbein, Charlotte Lessler, Martha Metzger, Doris Schrader, and Susan Evans. Donated library books were picked up from door to door by Joseph Margiotta and Philip Cosgrove with the use of garbage trucks loaned by Sherman Van Ness. Uniondale Girl Scouts and Boy Scouts also helped to collect almost three truckloads of books that were temporarily stored at Dale Pharmacy, compliments of Harold Goodkin.

The Uniondale Public Library officially opened its doors on September 1, 1954 under the supevision of Mrs Ruth Ann Hawthorne and Mrs. Helen Graves. A volunteer staff was trained to serve the people.

After one full year of operation, the library had issued almost 1,200 library cards and had built a collection of over 7,000 books. During that time library service operated solely on the volunteer efforts of the community without tax support.